Reaching half-way there, and 70 on July 4th.

The journey has at least taken us more than 400 miles from Portland.  And on July 4th – at that halfway mark – Brian turned 70 years old.  Having traveled on both 99w and then along Hwy 101, we’ve been to over a half dozen venues prior to Brian and Becky’s home before Arcata.  A day following his birthday party, we headed on again; biking along in solidarity with us: John Calkins, a close Arcata friend & fellow Veterans For Peace member, as well as Mango, who was present September 1st in ’87, at the Concord Naval Weapons Station, the day he was assaulted.  Together, we cycled to Eureka, and by the end of the day, we were with long time Bee-keeper friend Seth, in lower Humboldt, who brought Brian to a meeting with folks who are working to restore the Golden Rule; a wooden sail boat used in mid-century nuclear testing, in the Atlantic ocean. 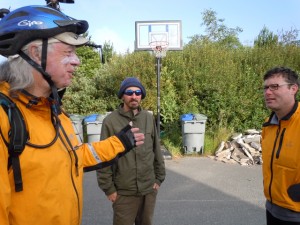 Brian and Joel get ready to leave Arcata on July 6th, accompanied partway by friends John and Mango (pictured in green jacket) 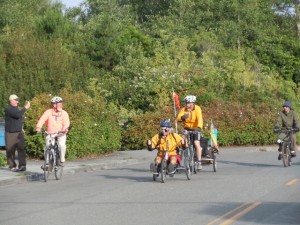 On the road again, cycling south. John Calkins (on left) cycled along to Eureka, Mango to Loleta.

This entry was posted in Blood on the Tracks, Book Talk, Book Tour. Bookmark the permalink.