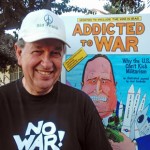 We want to take a moment to express our gratitude to Frank Dorrel, one of the hardest working people we know—working for peace, that is. Frank has been one of Brian Willson’s most ardent supporters ever since he heard Brian speak in the late 1980s. A clip of Brian is featured at the conclusion of Frank’s best-selling DVD compilation, What I’ve Learned About U.S. Foreign Policy. Frank is also responsible for publishing and distributing thousands of copies of the comic book penned by Joel Andreas, Addicted to War: Why the U.S. Can’t Kick Militarism, including a Spanish-language version. Frank is Brian’s biggest fan and the promotion he has done in the past two decades to get Brian’s message out comes straight from his heart. We are so grateful to Frank for arranging a second Southern California book tour for Brian, five events taking place August 16-19, 2012, and for doing it with his usual dedication and flair. We are also grateful to all the fine organizations that are cosponsoring the southland events.* Brian will be accompanied on this tour by Mike Hastie, a fellow Veteran For Peace who specializes in antiwar-themed photographic essays. Thanks to Frank Dorrel, they are both looking forward to a warm reception and a great round of events in So Cal.