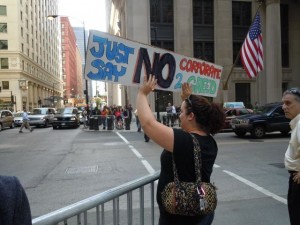 When setting up the East Coast book tour, the Chicago piece just slipped through our fingers, mostly due to lack of organizing time, but the way our schedule unfolded, we ended up spending one night there anyway. Serendipitously, with a nationwide occupation movement underway, and our train scheduled to leave late in the afternoon, we were afforded some time to visit the occupation being staged at a perfectly symbolic spot in downtown Chicago — in front of the Federal Reserve Building on the west side of La Salle, the Bank of America Building across the street, and the Chicago Board of Trade perpendicular to that on the south side of West Jackson. A high-end Anne Taylor women’s clothing store occupies the first floor of the B of A building with window displays lining the north side of Jackson. Large American flags decorate both sides of the front entrance Federal Reserve. A small but determined and diverse group of up to 70 people were out there holding signs, taping interviews, and making a percussive ruckus on plastic buckets, one large plastic kettle drum, and the metal barricades lining the street. We hung out at that intersection between 12:30 and 2:00 PM, observing, chatting with folks and taking photos. While we were there a large group of mostly African-American folks wearing blue shirts printed with “Accíon AHORA” paraded through the occupation on the Bank of American side of La Salle carrying signs protesting forecloses. They crossed Jackson and then boarded a yellow school bus on the other side. We found out later that there were several additional occupations happening simultaneously in different parts of the city, and although we didn’t witness them, we were told that marches were happening a couple times a day, some being routed down Michigan Avenue where we were staying. Click here to see my Chicago Occupation photos.