On Monday morning (June 26), Brian and Joel got up at 6:00am, were off by 6:30 and reached Salem around noon. Their route included a big hill on route 121 which was a bit of a challenge for Brian. Otherwise it was a pleasant ride that involved taking the Wheatland Ferry over to the east side of the Willamette River and then riding along the river on Wheatland Road, which becomes River Road and then Commercial Blvd. Total mileage between Newberg and Salem about 40. In addition, they cycled twice to the Book Bin from the home of their host, John Roy Wilson—once just to make sure they were ready for the event and then back again for the 3 o’clock book event. In the evening they cycled another 2+ miles over to the Salem Friends Meetings House where Fellowship of Reconciliation (FOR) was holding their monthly potluck and program, then cycled back to John Roy’s house. 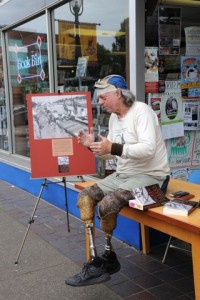 Brian talks in front of The Book Bin in Salem, Oregon

About 10 people came to Brian’s  talk at the Book Bin in Salem, which was held on the sidewalk out in front of the store. Four people bought books and the bookstore bought an extra four for their inventory. Salem host John Roy Wilson, a fellow Viet Nam veteran, served as a medic in Viet Nam. John Roy will be delivering a small number of Blood on the Tracks books to the Annual Northwest Regional Conference hosted by Western Washington Fellowship of Reconciliation July 1-4 at Seabeck Conference Center in Seabeck, Washington. Also present at the event was Michelle Darr, whom Brian met in Corvallis during his 2006 ride through Oregon. He reported that Michelle has started a small pedicab business. Brian was also pleased to report that his old friend Josh Dostis, a.k.a. “Waffles the Clown,” from Western Massachusetts, was able to hook up with Brian and plans to be present at Corvallis and Eugene events as well.