Posted on September 1, 2013 by Becky Luening

I sit alone in my home office in the wee morning hours of the anniversary of the crime that led to blood on the tracks twenty-six years ago, when I was 46 years old, more than eighteen years after my entire life perspective started changing radically while “serving” in Viet Nam’s Mekong Delta at the age of 27. My learning curve has always been slow ever since I was in grade school, seemingly always the last kid in my small, rural class to learn handwriting, to learn reading (always in remedial reading), to read music (still cannot read music), to learn basic arithmetic, etc., tho I was a good speller by 6th grade. The pattern began to significantly shift in 7th grade when I started to excel even tho I remained a slow reader, which is true to this day. By 8th grade which was as high a grade as my small, rural village’s school went in those days in the 1950s, I was the valedictorian. Then I took a bus to high school ten miles away which in those days seemed like a long ways. My lower-working-class religious parents were proud that I might get a high school diploma.

I did not begin to see any of the Grand Lie of the US mythology from the Puritans to the Founding Fathers to the Constitution to Manifest Destiny, etc., until spring 1969 during my first few weeks in Viet Nam at an old age of 27. (I was drafted at age 25 out of graduate school, dumbed down to the hilt.) It seemed, however, that as I began to see the first glimpses of the lie in the lives and bodies of Vietnamese villagers, its various and multiple layers began to rapidly unravel, over a period of four months. It was as if a guillotine suddenly had chopped off my ideological head. I was no longer able to walk the line, even as I initially really wanted to continue walking the path of American bliss. Just couldn’t put the lie back into the bottle as you all know in your own life experiences. My once proud parents were now embarrassed, resentful, and ashamed of their “lost” son. They were angry with my “bad attitude.”

But, still, it has taken many years to fully grasp the diabolical nature of Western industrial civilization, of nation-state-ism, of USA Disney, and it leaves me with grave questions as to how to recover my humanity while waking up each day in a culture of make believe and pretend, and bombings over and over and over.

On September 1, 1987, many of my family and friends (nearly fifty of whom were present as witnesses near the tracks at Concord) fully expected routine arrests of us three vets involved in the blocking action that day; we were fully aware we were risking a year in prison and $5,000 fine for interfering with movement of federal munitions trains. The lie of America, and all the moaning and suffering in its wake had been searing in my soul for 18 years by that time. I knew when that munitions train got by our block — the last obstacle to this death train being able to move lethal weapons to Central America with only one purpose, that of maiming and murdering impoverished people — real human beings worth no less than us would be maimed, murdered, displaced, and only a few people in my own country cared or gave a shit. The three train crew members, civilian employees of the US Navy, it turned out were also Viet Nam veterans, but they were still following orders of the Man which, on that day, said NOT to stop for us veterans. (This is literally true.) Unbeknownst to us at the time, Duncan Murphy and I were both on the FBI’s domestic terrorist suspect list due to our participation in the Veterans Fast For Life one year earlier.

And as I witness with all of you the United States’ continued historical pattern of barbaric war-making (well over 560 military interventions with troops since 1798; 28 countries bombed since 1945, Syria will be 29), I feel sickness in my stomach as I hear Obomber’s lead cheerleader, John Forbes Kerry (who was in Viet Nam’s Mekong Delta as a Navy Lt at the same time I was in the Delta as a USAF Lt) declare that the US must take the “moral high ground” to directly respond to Syrian “moral obscenity.” Kerry and I first met in 1971 at VVAW’s anti-war actions in DC in response to the moral obscenities being committed by the US in Southeast Asia. From 1982-1987 I associated with Kerry: first when he was Massachusetts Lieutenant Governor, then worked on his first campaign to become a US Senator in 1984, then served on his veteran’s advisory council once elected. Once in office, I soon became so disgruntled with Kerry that by 1987 I resigned from his advisory council. Though he sent condolence balloons to my hospital bed after I was nearly killed by the train (this is true), we have never seen each other since. Nevertheless, his campaign staff asked if I would work on his 2004 presidential campaign to defeat Bush II, hinting that if Kerry won I would be appointed to some position with the VA. Geez, these folks just don’t get it.

Kerry and I followed such different paths though both of us were anti-war when first out of that war in Viet Nam. But here is a case where power and ego can so smoothly lead to one’s adherence to diabolical behavior equivalent or exceeding the behavior we once renounced with vigor. And, isn’t it interesting that both our Secretary of State (a Delta Swift Boat commander) and Secretary of War (a Sergeant in the 9th Infantry Division, also in the Delta), are Viet Nam veterans who have said at various times that the US needs to learn from our “mistakes” in Viet Nam.

The diabolical pattern continues, and in some ways we are all complicit unless and until we collectively amass in the streets making governing/business-as-usual impossible, or in the alternative, totally withdraw our support by transitioning to local self-reliant communities possessing some autonomy—or some combination of each. Our country is unreformable and irredeemable, founded on the forceful dispossession of hundreds of Indigenous nations of real human beings in order to steal land, killing millions with total impunity; the forceful kidnapping of hundreds of tribes of Africans comprised of real human beings in order to steal labor, killing millions with total impunity; the forceful theft of raw materials and resources from around the world, killing and impoverishing millions with total impunity. These three holocausts have enabled us to believe we are an “exceptional” society. Rather, we are like spoiled adolescents who have never been held to account for our systematic criminality. The wool has not been pulled over our eyes. The wool IS our eyes.

The consequent pain and suffering caused by this historical pattern of US wealth built on massive exploitation has been outsourced out of our feeling field, out of our view, and still remains unspeakable. Yet the facade is cracking, as evidenced by the Occupy movement, and the repressive crackdown of that movement revealed how terrified the system is of people power emerging outside the claustrophobic box of acceptable reality. The official responses to the revelatory acts of people such as Bradley (Chelsea) Manning and Edward Snowden, show how really unbearable the truth is to the system; not surprising, since it has always operated on the lie, on pretend. Pretty incredible to watch how it runs for cover when faced with such dreaded transparency. 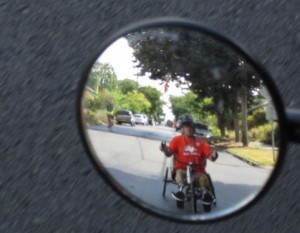 I celebrate 26 years of surviving a murder attempt that has left me walking upright on two prostheses, a plate in my skull protecting my damaged frontal lobe, with the grand opportunity of now having arm-powered myself more than 65,000 miles on handcycle. Today, Becky and I cycled to the rally against bombing Syria where we were inspired as we met many Syrians and other young people who totally get the lie. Yahoo!

Find your tracks, define your train, find others, and make your stand. Dignity trumps longevity.

— Brian, walking and handcycling in my 73rd year. Hard to believe.

One Response to September 1