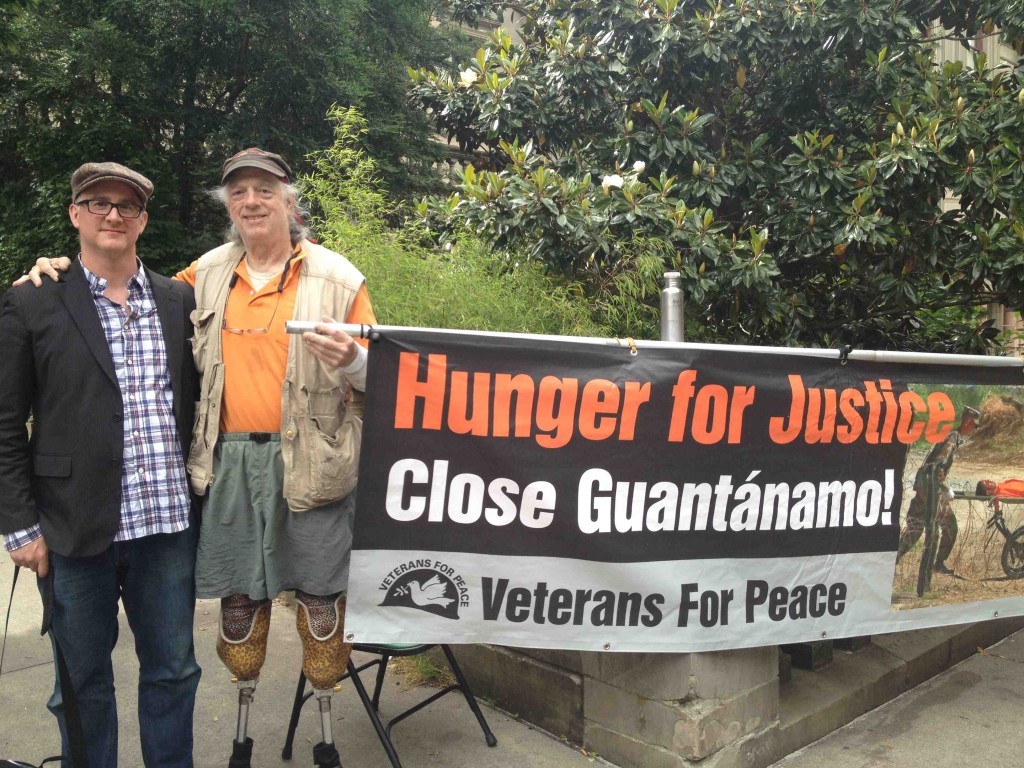 ABOVE: Portland, Oregon, June 11, 2013—Canadian playwright Sean Devine joins S. Brian Willson and other Portland vigilers calling for the release of illegally held detainees and closure of the Guantanamo Bay Naval Detention Center. Sean is the author of a play about Norman Morrison titled Re:Union; the published version will include a foreword by Brian. Sean blogged about meeting Brian in a 6/12 post on the Horseshoes and Hand Grenades Theatre blog.

As of Sunday evening, June 9th, S. Brian Willson has announced the end of the 300-calorie-a-day fast he managed to maintain for 28 days straight, but promises to continue to find other expressions of solidarity with the detainees at the Guantanamo Bay Detention Center. Over 100 of those being held at “Gitmo” have been on a hunger strike since early 2013 to protest their continued detention without charge or trial or prospect of release.

Brian intended to carry on his solidarity fast for a much longer stretch of time, but on the 22nd day of his fast he was struck head-on by an SUV while sitting at a stop on his handcycle, and the trauma sustained in that accident greatly speeded up the demise of his mental and physical capacity to maintain the fast.

A regular vigil in downtown Portland, Oregon (so far held in front of City Hall, at the corner of SW 4th and SW Jefferson), launched in tandem with Brian’s fasting action, continues indefinitely. Similar actions are being organized in communities nationwide to help raise awareness, keep the issue in the public eye, and keep the pressure on the Obama Administration to close the detention center sooner rather than later. To learn more, follow the nationwide campaign at CloseGuantanamo.net. Other good online resources include the Witness Against Torture website and the National Religious Campaign Against Torture.

Another action with ties to Portland is today’s release of the illustrated story of one woman Navy veteran who was based at Guantanamo at the time the first detainees were brought there in 2002. Though told in a spare, abbreviated, comic-style format, the beautifully illustrated story packs a punch by depicting the actual gut-wrenching experiences and emotional struggles of a real person. It is featured in the “Heroines” edition (#3) of the new Symbolia Magazine for tablet. You can download the magazine in iPad, PDF and Kindle formats for a mere $2.99.