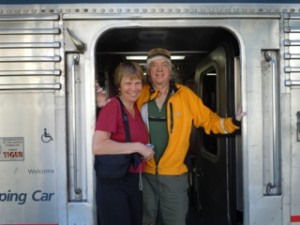 Our lovely friend Marcia Meyers gave us a ride to Union Station and saw us off.

It was a rushed beginning. Despite my promise to pack light, my suitcase is stuffed to the max. Happily, Brian’s painful pinched nerve, which a week ago had threatened to cause us to cancel the whole East Coast tour, is finally easing up somewhat, enough that he decided not to bring a wheelchair along. This is a great relief and makes us both feel a little lighter as we embark on our trip.

Endless details had to be taken care of in getting ready for our house/dogsitter, Shawn. Not unexpected since we were preparing to be gone for seven weeks (’til Thanksgiving!), but finally, as Marcia and Brian moved to the car, I had to leave the dirty dishes in the sink. At the last minute, Shawn experienced a breakdown on the way to our place, delaying his arrival until after we left home. He arrived just soon enough to be able to touch base with him briefly, via pay phone, just before boarding the train.

A glorious, sunny day after a week of rain, it was an auspicious beginning for our long journey. We start out skirting the Columbia River, on the Washington side, with spectacular views of the gorge on our way to Spokane where our train hooked up with its sister from Seattle, forming the Empire Builder. Our car is the last one on the train. Destination: Chicago.