Catching up with Brian

We’ve all been busy this past week, Brian preparing for his book launch event at People’s Co-op, he and Joel finalizing planning and getting packed for the trip, others (Becky, Nicole, Anne) helping to get the word out and finalizing tour details. Phew!

I think the best way to convey the unfolding of Brian’s book-tour adventure is to share a few photos (all taken by Mike Hastie, unless otherwise noted). Beginning with the “sneak preview” fundraiser at the Metanoia Peace House where Brian read on June 11. The living room was filled with like-minded folks who came to listen and were moved by the intensity of the stories Brian chose to read. His reading was well received and it was a great way for him to break the ice. 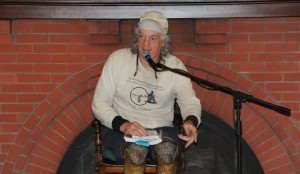 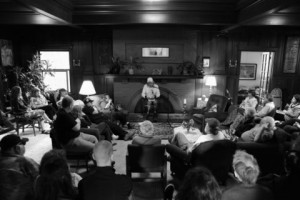 It’s always hard to tell how many people will show up at a public event, because there’s always so much going on in this town, but there did seem to be a bit of a buzz going around, a lot of excitement building and information going out in a variety of channels. We weren’t disappointed when 80-90 people showed up at People’s Co-op for the big Book Launch on Friday evening (June 24). It was hard to get an exact count because people kept coming up the stairs and then backing out because of the lack of room. Brian was seemed a bit nervous but he soon hit his stride. He told some stories, chose some passages to read, and then fielded a lot of followup questions before finally signing and selling at least one case of books, maybe two. Here’s a few pics from that night:

This is why they call it a "book reading" 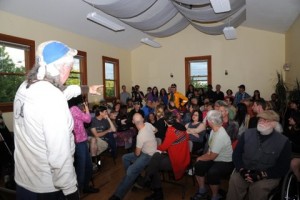 Brian points out his cycling companion, Joel Finkelstein (in orange jacket) at the standing-room-only crowd at his June 24th book launch event at People's Co-op. 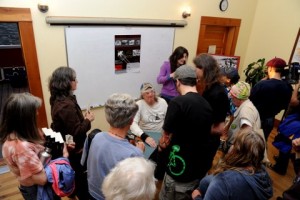 Although I accompanied Brian and Joel to the site of their cycling kickoff on Saturday morning (June 25), I missed the actual event because I had to rush off to my third day at the Focus on Book Arts conference in Forest Grove, Oregon. When I talked to Brian later, he told me about 15 people turned out to see him off, including a couple on a tandem. 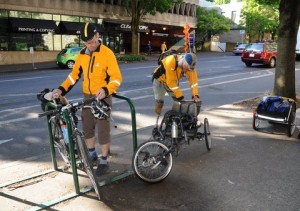 Joel and Brian get ready to leave from Portland city center

Checking the route with a knowledgeable cyclist 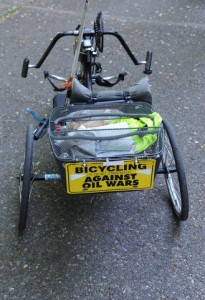 The sign says it all: “Bicycling: A Quiet Statement Against Oil Wars” 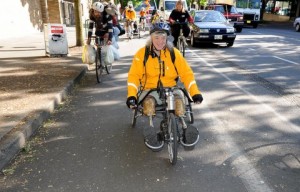 The trip to Newberg was about 25 miles. Of those who cycled along with Brian and Joel, most dropped off within a mile or two; four went four or five miles; and one accompanied them all the way to Newberg—Tim, a mechanic who works for City Bikes. They left Portland city center at 8:30am, a half hour later than planned, but still managed to make it to Newberg right at noon, as scheduled, where host Bruce Freeman escorted them all up to his house which is at the top of a long, steep hill. I remember riding up that hill during another bike ride we did in 2006, and I can attest to its steepness.

3 Responses to Catching up with Brian